The knights are restless and for good reason. 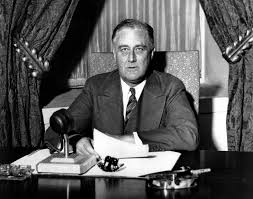 FDR at his
first inaugural address

FDR coined the phrase, “The only thing we have to fear is fear itself.” This is listed in the Official Psycho-therapists’ Dictionary as phobia-phobia. But according to the current President, following in the footsteps of that great protector of the Constitution, George W. Bush, we have lots of things to fear besides fear (speaking about things that cause restless nights).

But W was not the first President to ignore some of the rights granted by that great document. 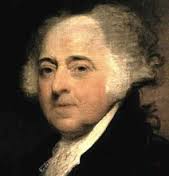 Our 2nd President -photo courtesy of the ACLU

John Adams was the first, with the Alien and Sedition Act of 1798. The only thing we had to fear then, were the French, as the law was enacted as a result of an undeclared conflict with France (No, the Freedom Fry was not the first time), known then as the Quasi-war. And all this time, I thought we had been engaged in a struggle with those nasty Quasies. It was the Federalists who pushed that legislation, while the Democratic-Republicans (yes, you heard right) counseled against it. The Federalists were concerned that the revolution in France might encourage the citizens of the new American Republic to follow in France’s footsteps. Adams was not receptive to the possibility of the punishment meted out to Louis and Marie by disgruntled (and restless) citizens. 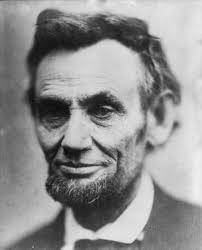 Next it was the Great Emancipator, who, during the Civil War, suspended the writ of Habeas Corpus. There were those who didn’t believe Abe had acted constitutionally. But in a war, Presidents have to worry more about the enemy than they do public relations..

Our current situation is the result of a policy that does not endear us to many members of the Muslim Faith. They seem to object to having their countries attacked, in some cases without provocation.  They get antsy when drone aircraft, directed by experts in the CIA (forgive the oxy-moron), decide on killing anyone who fits the profile. This designation appears to be any male within the so-called terrorist age range. Guilt or innocence seems to play no part in the decision process. So unlike most wars in our past, where the warring factions eventually sign an armistice, there is no one with whom to sit down – no Palace of Versailles, no USS Missouri, and no Appomatox Courthouse. Although the Korean War was never officially ended, we are not at war with any nation. We have, in effect, a war in Perpetuitistan.

So thanks to Herr Cheney, his lackey, Bush and now Mr. Obama, the USA Patriot Act rules the day. You can go to the link to see a summary, but in essence it means that it’s fine to flout the Fourth Amendment. I find it amazing that our brothers are willing to forgo that unambiguous amendment, the intent of which is to protect our rights, but will defend the Second Amendment to the death (literally).

I know there are bad guys out there who are so frustrated they are willing to commit violent acts against innocent people. Their Mullahs promise them a heavenly reward of up to 72 virgins for carrying out the will of Allah. They will not listen to my advice, which is to have sex before considering blowing oneself up, and take a little pleasure while they are still breathing. If they could relieve their natural frustrations here on Earth, as any healthy young male is wont to do, maybe there would be no such thing as an Underwear Bomber. Some “enlightened” Americans do everything they can to seek revenge for that violence, including shooting Sikhs because they wear turbans.

The government is protecting its ass (if not your rights) by garnering about 886 million emails. That’s more than I get in my spam folder in a week. Could you imagine going through close to a billion emails? Christian Mingle alone is accountable for more than half – just kidding; Canadian pharmacies actually hold the record. NSA claims they are only looking at metadata (data about the data) and not the emails themselves. This is also said to be true of phone calls and text messages. Now we are not talking about social media such as Twitter, Facebook and all the others, where folks have voluntarily chosen to give up their rights of privacy.  The FISA Court (established in 1978) is supposed to protect us from intelligence agency snooping, by authorizing only those attempts to spy on citizens that are suspected of crimes against the United States. Do we trust this court to be judicious in its decisions to allow or disallow that kind of privacy invasion? So far, their record is perfect. They’ve never said “no.”

I don’t blame us for wanting protection against things or people that could potentially harm us. This includes candidates for mental institutions who have been excluded from gun competency checks by our dedicated members of the U.S. Senate (despite a majority having voted for those checks). How about parents who do nothing to prevent their children from grabbing an unsecured AR-15?  And what about food supplies unchecked by an FDA that is seriously underfunded? May I mention toxic pollution in violation of the Clean Water Act and Clean Air Acts  (Oh, you want clean water and air – picky, picky)? I would like the “Intelligence” agencies to live up to their names, and actually do something intelligent, like talking to one another BEFORE an act is committed. I think that might be far more effective than having our shoes removed before each flight.

So, to keep me from being any more restless, PLEASE protect me from the protectors.